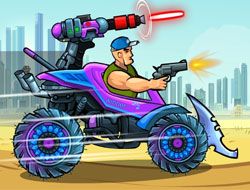 There's no way that right now you won't be having an amazing time from start to finish with a wonderful new game such as Mad Day Special 2, a continuation to an action game and shooting game with cars we've had here not long ago and which has been played by a lot of children, so we have no doubt at all that the same is going to be true for this one, a great new experience where you get to enjoy even more great levels in the same world. The world has been invaded by aliens that want to take over it, and that is why you're going to hop on the armored car and try to take them all out and save the planet. Before each new level, you can go to the garage, where you can buy upgrades for your cars such as new wheels, armor, or different sick weapons. You can also visit the armory, where you can buy new costumes for your soldier, as well as all sorts of cool guns to use against your enemies. You can also play three mini-games in the playroom, which give you the chance to win all sorts of awesome prizes. Your truck moves forward automatically, and you press the spacebar to jump over the boxes or any nasty obstacles, since they take out of the armor bar up top, which should not get emptied out, or you lose the game. Also, when you encounter alien enemies in front of you, press either the X key or the up arrow in order to shoot them down with the rocks and guns equipped to your car. Before you reach the end of a level, safely, defeat all the aliens, getting points in return, and try to collect as many coins as possible, to use them in the garage or armory, making your soldier stronger, as well as your military truck, so that threats from further levels can easily be dealt with! Good luck, and have fun with this action-packed game!

Use the spacebar, X key.

Haunt the House
SHOW ALL