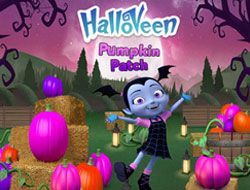 Sheriff Callie at the…

🧐 How is Halloveen Pumpkin Patch

Disney Junior characters love Halloween, which is why they've all gathered right now in one single game for you all to enjoy a great deal, the game called Halloveen Pumpkin Patch, an arcade game where you get to play four mini-games with your favorite characters on the network, ranging from memory games, decoration games, pumpkin carving games, or even skill games. All these four mini-games can be played with characters from different Disney Jr. shows, which is why the game is also found in categories like Vampirina Games, Puppy Dog Pals Games, Fancy Nancy Games, Micky Mouse Games, and Muppet Babies Games. You begin by choosing one of the games, and then the characters you want to play with. Let's give you an introduction into the world of each one, no? Well, you have the memory game, where instead of cars that need to be matched, you will have doors. Click on two doors simultaneously to open them and see the characters behind, and when there are two identical characters, they remain open. By matching the pairs you have to open all the doors on the hallways to clear the game. You are then going to have a pumpkin game, where you pick one pumpkin and can use three magical coloring and drawing tools from the left to put a design on it, whatever design you want to. The picture with the pumpkin you've made can be saved if you wish to. For the fourth and final mini-game, boxes are moving to the left and right, and when you click they get dropped. Drop the boxes that you stack one on top of each other without having them fall, and the bigger you make your stack be, the more points you make, so try to make it sky-high and gain a huge score in return! Enjoy your Disney Junior Halloween right now, and tell us in the comments which were your favorite game to play!

The Lion Guard Protectors of the…

Mickey and the Roadster Racers Games