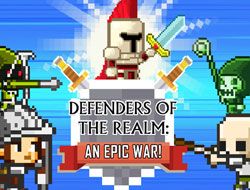 Defenders of the Realm An Epic War

😢 You have problems playing Defenders of the Realm An Epic War ?

🧐 How is Defenders of the Realm An Epic War

We know that our fan base really loves playing war games, especially if they are also a tower defense games and strategy games at the same time, which is going to be the case for everyone here right now, when we offer you the chance to enjoy the awesome game called Defenders of the Realm An Epic War, where your castle needs to be protected from the nasty orcs that are attacking it, because if they manage to get inside they are going to eat the people, and you can't want that to happen, right? After defeating the orcs, other kinds of creatures will start attacking too, level after level. With the coins that you have when you start, place some miners on the battlefield, since they are useful in producing more coins, and when they appear on the ground, click on them to collect. Coins are useful to buy more miners, as well as the warriors that you use to defend the castle, placing them wherever you want after choosing one. There will be swordsmen, archers, soldiers with spears, and your army can get bigger as you progress. Enemies can come from different positions, so place the warriors in their front so you take them down. Always be fast in producing more soldiers, and try your best to not just grow your army, but also think of the best strategies in taking out enemies, since placement and other things like that are important in a war. If you want more friv strategy games, know that we have a lot of amazing ones for you, and we highly recommend each!

Lego Nexo Knights Hunt for the…