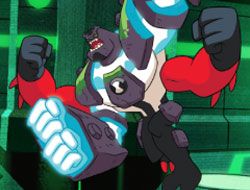 😢 You have problems playing Ben 10 Spot the Difference?

🧐 How is Ben 10 Spot the Difference

We can now confidently say that there are no better differences games online that you could play with Ben 10 at this moment than the one you are in front right now, the game called Ben 10 Spot the Difference which we are highly recommending to each and every one of you, because we've enjoyed playing it a lot, and since we know that the whole world of online games is a fan of these Cartoon Network, there's no way that this game won't become one of our most popular ones of the day. It features aliens that you know and loves such as Four Arms, Heatblast, Cannonbolt, Grey Matter, Overflow, and others since we don't want to ruin surprises for you. Two images will be placed side-by-side depicting one of these aliens as they are used by Ben Tennison in one of his missions to save the world, and while the images might seem to be identical at first glance, there are actually five differences between them that you need to spot and click on when you do. If you get that done, the differences are going to be marked, and not just that, but you also get 100 points, which means that you get 500 points in return for each level that you've cleared. There's a thing you should know, though, which is that the differences all need to be found before the time granted for that runs out on you, which is represented by the green bar at the top that is turning red, so do not let it get completely red without you having found the differences. Also, if you click here there is nothing different you lose a little bit of that time, so don't make too many mistakes, it harms you. Good luck, and improve your attention to detail with this brilliant difference game right now, only with Ben 10!

Coolest Coaster Designer Ever
SHOW ALL