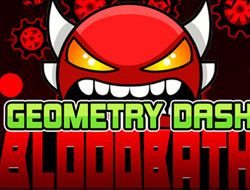 🧐 How is Geometry Dash Bloodbath

When it comes to running and jumping platform games, we know for a fact how much kids all over the world love Geometry Dash Games, a series that always brings something new and interesting to the table, which is why we believe that right now you are all going to be giving a chance to the new and awesome game called Geometry Dash Bloodbath, in which the squares you control will be devils, zombies, or different hellish creatures, which is where the title comes from, in addition to the fact that the entire world of the game is out to get you! You get speed by pressing the right arrow, you stop with the left one, jump by pressing the up arrow key, and if you want to slide under obstacles, press the down arrow key. In each level, you have the main goal of reaching the end of the level as fast as possible and advance to the next one through the portal. You need to avoid by jumping or sliding the different obstacles you encounter, such as spikes, saws, and other dangerous items, which can be placed all over. Try not to die too many times before you complete a level, because the less you do it, and the faster you are, the more points you are going to get at the end of it. The levels get progresivelly harder as you advance, but they also get more fun, so give the game your best all the way through, and don't stop here, since we would love to see you playing more of our new games of the day, which will be some of the best on the internet!