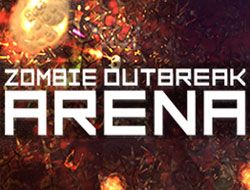 🧐 How is Zombie Outbreak Arena

Games with zombies are always a great idea, which is the reason why right in this instant you are all given the chance to enjoy the new and awesome game entitled Zombie Outbreak Arena, where once again you are put in the shoes of a survivor and have to do your best so that you survive the hordes of zombies all around you, this time in the setting of an arena, with a game that is action-packed, and it also involves shooting, so boys from all over the world are surely going to love it. Have no worries, since right now we're going to explain what you have to do, so make sure you pay close attention! You begin by choosing if you play during the day or during the night, and then you pick one of the available arenas: crossroad, train station, maze, park, or a road. You move around with your shooter using the w, a, s, d keys, and when you want to shoot the zombies around you you simply aim and shoot using the mouse. You are being timed, so give it your all to survive as long as possible, have as many kills as there can be, and also make sure to grab any weapons or power-ups you might find since we are positive you will find them very useful when there are lots of zombies to kill. There will be other survivors out there, so try to help one another when needed, and, also, know that the more you go on and have great kills, the more experience points you get, so try to climb up in rank as much as possible. Good luck, and don't stop here, since the day has only just begun, and we would like for you to play as many of our new and interesting games as possible, you will not regret even one of them, guaranteed!