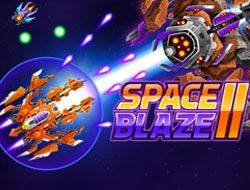 😢 You have problems playing Space Blaze 2?

Space shooting games online have always been a good time to have, especially when they are high-quality and fun such as this one, a new and awesome game called Space Blaze 2, one where you get to take control of your own spaceship and fly it in the sky and shoot all of the enemies you encounter, something that we have done and really loved doing, so there's no doubt in our minds that the same is going to be true of your own time with the game right now. Don't worry about not knowing what to do, since we explain everything that is needed right here, making the playing of the game be quite easy for you! You start with the levels, but after a while, you get to unlock the nightmare mode. The alpha spaceship is available at first, but more become available as you progress. You click and hold the left mouse button on the spaceship to move it around, and it is going to fire automatically. You use this movement in order to shoot the enemy ships at the top without letting them reach you, or hit you back since they are going to shoot at you as well. If your health bar from the top gets depleted, you lose, so don't let that happen. Now, after defeating enemy ships, stars are going to get left behind, and you collect them, and after a certain number of stars, you get more powerful beams to use in your attacks, which defeat enemies quicker. Also, the more you survive, the bigger your score gets, so aim for a big one. The ships can be larger or smaller, but they are all dangerous, so treat them all as such. Let the fun begin, and don't leave anywhere, since this day is promised to bring you joy with all of our great new games!

Race to the Rescue

Bakugan The Big Battle
SHOW ALL