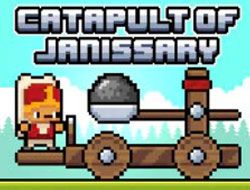 😢 You have problems playing Catapult of Janissary?

🧐 How is Catapult of Janissary

In our 2 Players Games category we have had other Jannisary Games, which is a series of games for two which is of a great quality, and which has been really popular with each new addition for it, so of course, we would be glad that right now we could share with you a new addition for it, which is the game called Catapult of Janissary, which is a catapult shooting game where the two players, or competitors, are going to try to shoot each other down using catapults, which is surely a fun way to do it, right? Don't stress at all, since this following part of the article teaches you what to do as well as how, so read this to the end and then give the game everything you have best! Firstly, know that the player who wins is the player who lands five shots against the other one first. You are going to use the mouse to adjust your angle as well as the power of the shot, and then release the catapult to throw the rocks at the opponent. If you hit upgrades that are in the air, you get to use them, with different ones being available, such as smart, ghost, big, or bomb, which are four modes that can give you plenty of advantage and more chances of hitting your opponent. Take turns in shooting your catapults, and we hope that no matter who wins the match, you remain friends, and then give the game another go, or, who knows, maybe you try more games from this same category!