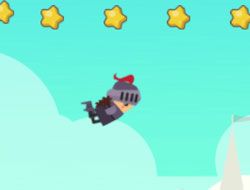 😢 You have problems playing Knight Ride?

🧐 How is Knight Ride

Cannon shooting games with knights are a great time to be had, especially when we are talking about high-quality games like the one that we have provided you all with right now, a game called Knight Ride, where all of us have had a tremendous time from beginning to end, just like you are going to as well, which is why sharing it with you all as quickly as we could be something that we wanted to happen. Now, in the following part of the article, we are going to tell you everything you need to know about the game's format so that when you start playing it you are able to give it your very best from the get-go! The cannon moves up and down all the time, so when you think that the angle is right, click to make the shot. Your knight is then going to be in the air, flying, and you can click on the screen to make them jump, but know that the number of jumps is limited, and it is shown by the bar on the top left. Through the air, try your best to collect as many stars as possible, because they represent your score, so going the distance means getting more stars. There are things that are put in your way to stop you, such as wheels moving, or birds flying in the air, so make sure to avoid those, because hitting any of the obstacles you encounter means losing the game and having to start all over again, and if that happens, we really hope that next time you get further and make even more points than previously. Share your high score in the comments, and maybe invite your friends to play our tremendous games also, they are not going to regret it, that's for sure!