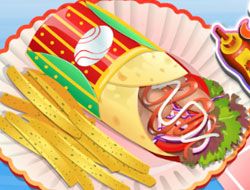 😢 You have problems playing Kebab Maker?

🧐 How is Kebab Maker

We're always excited when new and awesome cooking games can be provided by us for the many children coming here day by day for the best new games on the internet, so when we got the chance of sharing with everyone here a game such as Kebab Maker, we knew that adding it as soon as possible is what had to be done, even more so because we don't think that we've had shwarma cooking games online added here before, so we are definitely excited for this one, which should be a fresh and exciting experience for all. Obviously, all the kids playing this game are not familiar with how to make kebabs, so we are going to teach you how you do it in this game right now so that you can begin having fun with it right away! In the first part of the game, you start by washing the lettuce and then putting it on a plate. With the mouse, you then cut the tomatoes, peel and slice the onions, as well as cutting cabbage. In a bowl, you add flour, eggs, pepper, and onion, which are all mixed up together to make the sauce. That is the white one, after which you also create the red sauce. This is the whole first part of the game. You are then going to use the mouse to mix together all the nine ingredients from the little cup. Use the mixture to put on the meat, which you then slow fry. You then cut some of the meat in slices. Finally, take the meat, the vegetables, and the sauces, and either places them on the plate or create a roll kebab by rolling them in the pita. It is as easy and fun as it sounds, so nothing should hold you back from trying this terrific game right now, and having fun like only with our amazing games is possible!

Blues Clues and You World Cooking

Lego Friends Ice Cream For All