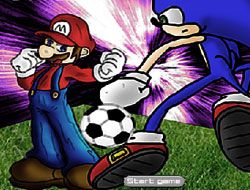 😢 You have problems playing Sonic vs Mario Football?

🧐 How is Sonic vs Mario Football

Sonic and Mario are both the flagship characters of Sega and Nintendo, respectively, so the two of them to be featured as rivals in online games is something that you will see a lot on our website, even more so because we've got categories dedicated to both of them, where right now we would be delighted to share with you the game called Sonic vs Mario Football, where you get to play soccer with the two video game characters.

First, know how to control your football player. You use the W, A, S, D keys to move, space to change the player you want to use, and the mouse to shoot. Start by choosing if you want to be either Mario or Sonic. Obviously, your purpose is to score more goals than the other team before the time granted for the match runs out on you, with the team that scores the most becoming the winner of the football match, simple as that.

Good luck to you all, as now you know how to play soccer with these two beloved characters, and we hope you will stick around for all the other great games this category has in store, where you will also have plenty of fun, guaranteed!

Sticks the Badger Dress Up

Rescue of Titans
SHOW ALL