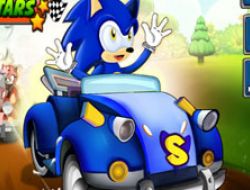 🧐 How is Sonic Stunt Cars

You might think that because Sonic is the fastest hedgehog in the entire world, he does not need cars at all, but it is not about speeding and driving cars with him, but it is because he loves driving them, and even more so when they are cars with which he can perform stunts on all sorts of crazy tricks, which is what you will be doing right now and here with the game called Sonic Stunt Cars.

First things first, learn how to control your car. You use the arrow keys to drive, you press the spacebar to jump, and the B key for breaks. Drive fast to reach the end of each track in good time, as you will be timed on a clock, and jump over the pits and the obstacles, so that you don't get stuck and lose.

As you keep on driving, give it your best to collect as many of the rings on the track as possible, since they are your score, and the more of them you grab, the bigger your score becomes, obviously. Of course, the tracks get more difficult to drive on as you proceed through the levels, but that makes them more fun and exciting at the same time!

Now that you've understood, don't hold back, drive fast and perform stunts, and stick around to play even more great games with Sonic like only here can be found!

Use the arrows, spacebar, B key.

Sticks the Badger Dress Up