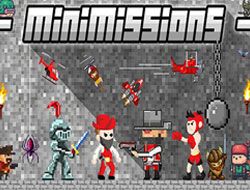 😢 You have problems playing MiniMissions?

MiniMissions is a compelling game that is actually an accumulation of eighty mini-games, so you really have all of the reasons to try it out right now, or, better said, you've got 80 reasons to say so. The game is called like that because it features these eighty mini-missions, arcade games of different genres with which you can have a lot of fun, so no matter what your tastes for gaming are, we're sure you will find games to your liking here.

If you love action, you can try out a boxing game where you have to fight another boxer, a shooting game with cowboys whom you have to be faster in shooting than in order to take them down, you have a tank invasion game where you get behind the wheel of this war machine, you can go on a run with a ninja, or you can be a knight in shiny armor and go on a rescue mission.

We know that there are sports fans here also, so you can play sports online in this game such as soccer, tennis, ping-pong, or golf. Other things you can do is a face-off with zombies whom you have to shoot down, put out the fire of a burning house, get behind the wheels of cars and race other ones, play jumping games, or animal games with spiders or bats.

Before starting each game you will learn about the rules of the game and the controls you need to know about, so remember them, and then give the games your best, in order to have the best experience out of this game!

Use the mouse and keyboard.