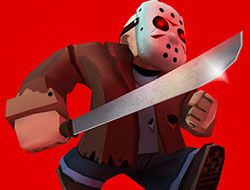 😢 You have problems playing Murder.io?

On GamesZap you will always be able to find and enjoy the best new io multiplayer games online on the internet, which is the reason why right now we have shared with you the game called Murder.io, which is an action game where you play the role of a murderer, which already makes the game a unique experience, don't you believe?

Your murderer will be able to have any nickname you give him, and there are multiple skins for your character but know that you will have to get a certain number of kills in order to unlock them, so the better you perform as a killer, the more characters you will be able to turn yourself into.

To move your muderer you use the arrow keys, you press the Z key to attack, and the X key to picking up items that you might find along with the locations, such as weapons. You will have axes, guns, swords, and more. In the room, you are, try to kill as many people as possible for a big score.

Make sure not to stand near the dead bodies or to kill people in huge crowds, because that is going to draw attention on yourself, and if you do these things, the police are going to come after you, you get caught, and you have to start again, having lost all the progress you already made.

Good luck, and make sure to stick around to see what other amazing games we have had prepared for you free of charge, one more fun than the other!