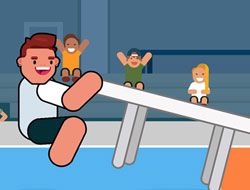 🧐 How is Table Tug Online

For fans of multiplayer games, we've now added Table Tug Online, an interesting io game where you enter a table tugging competition against kids from all over the world, an experience we'll tell you about right now! This game takes the concept of tug-of-war games and makes it a little bit more interested, because instead of tugging and pulling on a rope, the two players will be holding the two ends of a table, with the goal that you have being to pull the table with the other player to the side of your field, with one player having the red pitch and the other one having the blue pitch. We said this game is a multiplayer experience, so start off by choosing the username you want to be known as. Be careful, because if you change your window, you will be logged out. In order to draw the table towards you and tug it, press either the spacebar or the up arrow, depending on which one is more suitable for you. After starting the game, wait for an opponent to be selected, and then start tugging it out! If you can draw the opponent over to your side of the field for three times first, you win a match, and the more matches you win, the more coins you get rewarded with, and those coins allow you to buy new skins for your characters, since you can change your appearance in all sorts of crazy looks, if you have the necessary funds! It is as simple as that, and now that you know, you should be able to give every match you take part in your best, and we have no doubt at all that this multiplayer experience will be one you love, just like you love other of our io games online!

Use the spacebar or up arrow.