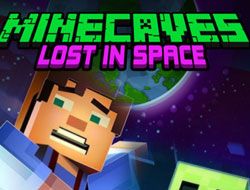 😢 You have problems playing Minecaves Lost in Space?

🧐 How is Minecaves Lost in Space

Minecaves Lost in Space is one of the best maze games and puzzle games with Minecraft that we believe we've ever had here, a mobile-friendly game where each member of our administrative team has had a blast from start to finish, just like we expect each and every one of you to have right now, as you join Steve in a space adventure, as he has gotten stuck in several space mazes, and only you can help him return to his world, by clearing all of the levels. Like we said, each level is created as a maze, and you complete it once you've collected all the jewels, which will open up the door for you to advance to the following level. There are also three stars that can be collected from the maze, and if you grab them all you get all of them in the stats, which is important for each level. Also, for the jewels that you've collected along the way you get points in return, so try to rack up a score as big as possible. Now, the mazes are not that easy, and they get progressively more difficult as you advance, but you need to get past anything that stands in your way, such as the monsters. Avoid monsters, because one touch from them costs you a life, and if you lose all your three lives you also lose the game. In further level, the water levels will get bigger, so go over the arrows in the mazes to make the water go up and down, allowing you to explore new parts of the maze to complete your stage. Move Steve in the direction you want him to go by pressing the corresponding arrow key, and know that he will go in that direction until he hits a wall. We hope you complete all levels, get three stars at each, and when the adventure is finished and Steve is back into his Minecraft home, you will have racked up quite a big score too!