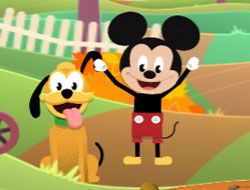 🧐 How is DisneyNow Cart Blaster

When it comes to Disney Games online, we really love it when multiple characters from their shows and movies can come together, just like they all do right now with the amazing new adventure and shooting game called DisneyNow Cart Blaster, an experience with these characters unlike any of you has had here before, since we're talking about an arcade game that will make you able to play with different shows such as Big City Greens, Descendants, Just Roll With It, Vampirina, Gabby Duran and the Unsittables, as well as Mickey Mouse Games. You're going to begin by choosing one of the shows, and you will see that the design of the cart you will be driving changes from one show to another in order to reflect it. You're going to automatically drive the cart through the hallways and end up at windows, each one representing a stage for you to beat, and through each window, you are going to see a new and different setting, one that will have a new look. In each level, you have to shoot a certain way and a specific type of item to get points, such as the lamp post in the first level, or the colored balloons in the second. To aim and shoot the cannon on your cart you simply use the mouse, moving it to aim and then clicking to shoot. You will see that from the blaster you will shoot different things such as watermelon, apples, balls, pickle jars, donuts, eggs, and many more. You are playing against time, so finish your mission before the clock reaches 0. Good luck to everyone, and we really hope that you stick around and give a chance to more of our great new games of the day!

Lego Ninjago In the Dragons Land