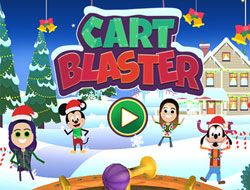 🧐 How is Winter Cart Blaster

We have had Cart Blaster games online added before into the Disney Channel Games/Disney Junior Games categories of our website, and the newest one that you get to play together with the characters that you love so much from different shows on this network is this one, a new and awesome game called Winter Cart Blaster, which has a winter theme just ready for Christmas, meaning that the different scenarios you will be playing in are going to be filled with snow, Christmas trees, snowmen, mistletoe, decorations, and the like. Begin by choosing by what show you want your cart to be inspired by since it will have a different design depending on the show. You have Big City Greens, Descendants 3, Just Roll with It, Vampirina, Gabby Duran and the Unsittables, Mickey Mouse, Muppet Babies, or Tiny One's Transport Service. After you have chosen, your ride with the cart starts, moving through the hallways until you reach the first window, out of which you are going to shoot. For example, in one of the locations you are playing you use the cart to shoot at the lights in the town so that you light them up, and you have a certain amount of time that you need to accomplish that in. You use the mouse to click in the direction you want to fire your blaster and make sure that you don't hit the characters that appear randomly since they would not like that at all! When you are done, you will continue blasting other things, and so forth, until the winter ride is over, and you will have had fun with the best Disney characters out there! Start the fun right now, and remember that the day is far from being over, so make sure to stick around and play all of our other cool games still to come!

Gabby Duran and the Unsittables Games

Clash of the Legends