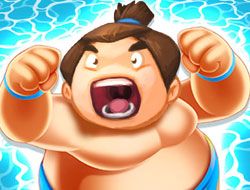 😢 You have problems playing Huge Sumos?

🧐 How is Huge Sumos

We know that you love playing 2 player games online and if they are also fighting games as well, even better, no? Well, we've got a really awesome surprise for you, since right now we have shared with everyone here one of the newest sumo games 2 players on the internet, a combination that you do not see very often, and it is precisely for that reason that you should give this game a try right now and see yourself how awesome it is. You start out by choosing if you play against the computer, against a real person in the two-player mode, but you can also pick the training mode to hone your skills before starting to actually fight. Just like in real sumo wrestling games, your goal is to push the other sumo fighter off the ring, because then you won the battle. One player moves their fighter with the arrows while the other one uses the w, a, s, d keys, and know that the fighting matt is going to be around one. Sumo fighters are known to be fat, which is where a lot of their strength comes from, so when food is falling from the sky, such as ramen, sushi, or rice, make sure to grab it, since it means you eat it and get more power to push your opponent. Since you will probably play against a real player, try your best to see which one of you is going to earn more victories and becomes the best fighter ever. We've got even more great games for you to play today, so don't leave anywhere, since it would be a shame for you to miss them!