Cuphead and the Root…

Cuphead: Ruse of an… 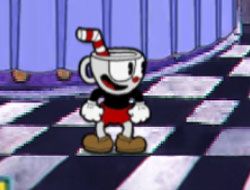 😢 You have problems playing Cuphead Brothers in Arms?

🧐 How is Cuphead Brothers in Arms

It's been a while since we've last added any Cuphead Games online over to our website, which is the reason why we are very excited that the game called Cuphead Brothers in Arms could now have been added for you all free of charge, a game where we are sure you're going to have a blast, where you have to help Cuphead and his friends defeat three bosses in order to win the game, and we're positive you will have plenty of fun doing it. It's one of the most unique fighting games this category has had, and we will be using this article to teach you about its gameplay, making sure you are able to give it your best! You will have a huge puppet that is going to put out evil puppets from the ground for you to defeat, such as bears, rabbits, and even pizza will be thrown at you. Make sure to avoid getting touched by any of these things, because if that happens you lose a life, and you're only going to have three lives at your disposal. You control the movement of Cuphead using the arrow keys, X to shoot, Z to jump or parry if you are in the air, shift to dash, C to lock, and V to use an ex move. This way fight off all of the crazy enemies that you are faced off and give it your all so that you defeat everyone in the first level, then in the second and third, and be the Cuphead champion. Good luck, and remember that we have plenty more brilliant games in the same category, in different genres, so we would definitely recommend that you check them out!

Cuphead and the Root Pack

Cuphead: Ruse of an Ooze

Cuphead Against the Crazy Cat

How to Draw Grizzy