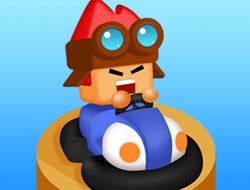 🧐 How is Kart Fight io

Starting off the week with a cool new game such as Kart Fight io is going to make your whole day better, as we are positive that everyone here really loves to play Io multiplayer games in 3d, especially if they are unique and as fun as this one is, a game called Kart Fight io, where we are very happy to say that all of us have had quite an amazing time, as we've entered this multiplayer battlefield, and we can say we have had a great time even when we did not win, but we're sure that our visitors are winners, and that won't be the case for you. In this game, you enter an arena after you decided which name you will be known as, and you are playing against people from all over the world, with the flag of their home country being shown on display. You will have the mission of driving your cart around the islands surrounded by water, and some of them even having lakes in them, where you have to try your best to knock off the other players and bump into them so they fall off the map. The players will try to do the same to you, so make sure not to let them. Oh, and did we tell you that your driver will be the avatar of a cat? Even better, right? You will click and drag the mouse around the screen in order to drive the kart around. When you can knock off a player, you will get bigger, which gives you more strength, as it is important to be big, because then it is easier to take out enemies, as the bigger you are, the more power your bumps will have. Good luck in your upcoming kart battles, and stick around all day long if you want to have fun with one new and awesome game after the other like only here can be found!

Elena of Avalor with Differences
SHOW ALL