Fly or Die With Zombies 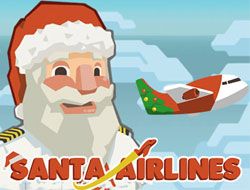 😢 You have problems playing Santa Airlines?

🧐 How is Santa Airlines

It is Christmas 2019, and Santa Claus thought that it would be time he left the dusty old sleigh in the garage, and get on with the times, which is the reason why he has got a plane, an airplane that you're going to help him fly this Christmas, in the new and awesome game called Santa Airlines, a great new flying game unlike you really get the chance to play and enjoy any day, so we're positive that right now you're going to have an incredible time. You will be flying in the sky and try hard to collect as many gift boxes as possible because you will then deliver to the children who are waiting for them under the tree on Christmas morning. To navigate the skies you click in the direction you want to go, such as up, down, forward, or backward. There are the regular gift boxes that you should fly into, but when you see green ones, go through them also, since they provide you with more speed to fly faster. When you see kids flying around, grab them and bring them to safety. Your goal is distance, meaning you need to see how far you can go without crashing. What can you crash into? Well, the air will have obstacles such as clouds and other airplanes that you need to avoid, since hitting into them slows you down, or you might even crash, and your goal is to make a flight distance as big as possible before the clock reaches 0 seconds. Your score is also represented by distance, so keep flying, and don't forget to see what other great games with Santa Claus, airplanes, or simple friv games for Christmas we have here, as they're all amazing in their own right!

Fly or Die With Zombies