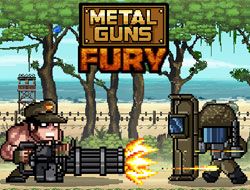 😢 You have problems playing Metal Guns Fury Beat Em Up?

🧐 How is Metal Guns Fury Beat Em Up

It's time you got ready for action with the new and awesome fighting game shared with you all right now by our administrative team, a game called Metal Guns Fury Beat' Em Up, a cool game for boys we would highly recommend to everyone, considering that we have enjoyed it really much ourselves, so having shared it with you now was definitely the right call to make. You're going to be a soldier out on the battlefield, trying his best to take out all of his enemies, and we now teach you how you do it so that you stand tall and are able to give it your best! Firstly, know that the graphics of the game are inspired by classic 8-bit games, so it has a unique and interesting style. Survive each mission or level that you take part in, having to take down the required number of soldiers for that level in order to clear it. After you do so, in return you get coins as well as different rewards, and we advise you to use the coins in the shop to buy new weapons such as knives, guns, bombs, and more, so that no matter how strong the enemies are, you have what it takes to bring them down. Moving your soldier is done with the right and left arrow keys, and when you want to shoot or attack, press the spacebar, simple as that. If you want some extra help, there will be power-ups that appear at random times, so grab them and use them to your advantage in fighting. You can also collect diamonds, which you can exchange for cool stuff later on, so when you find one, make sure to pick it up. Have a great time right now and here, and don't stop, since we're sure that you want to have even more fun here today, and you can have it, all for free with the other games that are still to come!