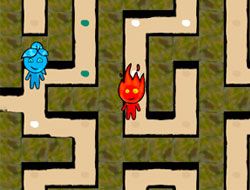 😢 You have problems playing Fireboy and Watergirl Maze?

🧐 How is Fireboy and Watergirl Maze

Fireboy and Watergirl Maze is not just our newest game of the day, but also one of the Fireboy and Watergirl Games of our website that we had been most excited for, lately, because it is one of the most interesting maze games online we've had here in a while, where escaping a maze is not just a matter of survival, but this time it has been turned into a race, where Fireboy and Watergirl compete against one another, with one of you players being the girl and the other one being the boy, and you will try to get out of the maze faster than the other player. In each level, you are presented with a maze, and you have to take your character on the shortest route and get to the exit before the other player to win the race. The first player to exit the maze wins that round, and at the end of all the rouns, the one who has most wins becomes the ultimate winner of the game, of course. One player controls their character with the arrows while the other one uses the w, a, s, d keys. The number of steps you make the whole time is also monitored, so try to have it short so that you prove you took fewer steps to finish a level. Good luck to each player, have fun in this maze racing game, and don't hesitate to try the other classic Fire and Water Games of our website, since we are totally positive you are going to love them as well since they are really great on their own!