Harley Wants To Be… 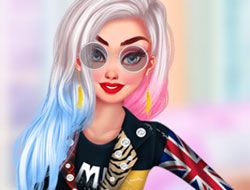 It's definitely the best time of the year to bring you new Harley Quinn Games, since her new movie from the DCEU is about to be released, and the character had already been really popular, but we suspect that now there might be even more girls from all over the world who will want to come here to play these games, and the latest one is this one, a game called Villain Princess Four Different Outfits, where Harley wants to prove that she is not just crazy, but fashionable too, which is why you are going to dress her up four times, in four different styles, which are as follows: dress her up for school, give her a rebel look, a geek outfit, and finally a party outfit for going to the club and having fun. Obviously, since there are all different things, the girl will have different clothes in her wardrobe each time, such as tops and bottoms of different styles, dresses, accessories like bags, glasses, or jewelry, pick up a hairstyle for her, and she will be ready to impress no matter the occasion! Simply click on the clothes and items in the wardrobe and they are going to appear on the girl instantly, simple as that! Good luck, and don't stop here, since we would love if you were to also check out other new games added here today since all had been really wonderful!

Harley Quinn Hair And Make Up…

Harley Wants To Be A Princess

Which DC Superhero Girl Are You?

BFFs Getting Over A Breakup