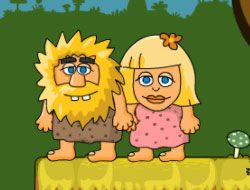 😢 You have problems playing Adam and Eve GO?

Adam and Eve Cut the…

🧐 How is Adam and Eve GO

The Adam and Eve Games still has plenty of more new and awesome content to offer you, which is the reason why right now you are all getting the opportunity to play the latest game in the series, a game called Adam and Eve GO, which differs from the previous puzzle-adventure games in this series mainly by the fact that it has more adventure elements than a puzzle game.

Why do we say that? Well, instead of having Adam be static until you clear all of the obstacles in his path, he is actually going to be moving around and getting past them actively, using the arrow keys to control moving him around. Of course, the goal remains the same, reaching Eve at the end of each level.

Advance through the forests or through the underground, get past dinosaurs and mammoths, as well as frozen men, slaves, or mummies, and make sure that before you reach the end of a level you collect the red flower to bring it to Eve, or you can't complete the level.

Interact with the levers, keys, and other items that help you advance, and if you want to get a big score, collect as many of the fruits as possible, with bananas, apples, and others being laid around the levels.

Good luck to each of you, and we hope that if this is your first time playing games with Adam and Eve, it will convince you to try out even more of them and continue the fun!

Use the mouse and arrows.

Adam and Eve Cut the Ropes

Adam and Eve The Love Quest