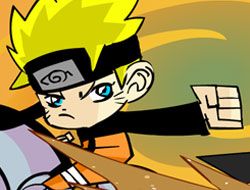 We're sure that after you've watched even one episode of Naruto, one of the best anime with ninjas out there, you wanted to become a ninja in Konoha or another hidden city in this world and use the ninja skills and powers to defeat other ones in battle. You can now do that, virtually, through Naruto Flash Battle, a great new Naruto fighting game we recommend to boys everywhere!

You can do battle in the Versus mode, which is basically a quick fight mode where you fight with the ninja you want to be against other random ninjas, you get the Story mode, where the battle has a storyline waved through them, the Training mode, where you improve your skills before the battle, or the Survival Mode, where you have to stand against all the ninjas, one after the other.

Oh, and, also, the Versus mode has the option of you playing in 2 Players, so if you've got a friend you want to battle Naruto-style, invite him over to fight. Like in all fighting games with a beat'em up style, what you have to do is use your abilities and fighting power to deplete the enemy's health bar before they can do the same to you first.

Player 1 uses Y, G, H, J to move, A to punch, Z to kick, and E for using a ninja ability. Player 2 moves using the arrow keys, 2 is for punching, 3 is for kicking, and 9 is for a technique. Now that you know how to control your ninja warriors, fight your way through all your enemies, and become the best Naruto ninja ever!

Naruto and Friends Dress Up