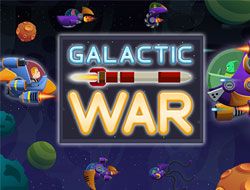 😢 You have problems playing Galactic War?

🧐 How is Galactic War

If you love going into space and having space battles, then we highly recommend doing it right now and here with the awesome and fun new game called Galactic War, a terrific new game where you are in for a whole lot of fun, just like we've had, because that was why we've shared it here with you in the first place.

First of all, know that you can play this game either on your computer or on a mobile device, so you've got two ways you can have fun with it. Move your spaceship using the arrow keys, press the spacebar when you want to shoot, and press the H key when you want to activate power-ups after getting them.

Some of the power-ups you can use include a triple shot, a drone shot, a laser beam shot, a missile shot, or a shield for protection. Obviously, what you're after is going and flying in space, shooting down the alien enemy ships, getting points in return, and surviving against them for as long as possible.

Now that you've understood, let the fun begin right away, having fun like only here is possible, and make sure to tell your friends about the many awesome new games that we're sharing here day after day!

Use the arrows, spacebar, H key.

March of the Cards