Guardians of the Galaxy… 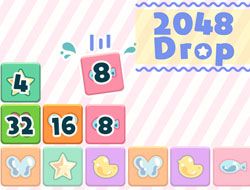 I am Frankie Jigsaw…

When it comes to puzzle games with numbers, we know for a fact that 2048 Games are some of the most popular ones on the internet, as a few years back this format of the mobile app was one of the most downloaded one, and we know that to this day this format is popular, and it is even better than today you get to play a game like 2048 Drop, since it is a little bit different from other games in its genre.

Instead of starting off with one or two tiles to combine, you will have empty brackets, and the tiles with the numbers will fall from the top of the screen, with you using the mouse to move them around. The goal is to take two tiles with the same number and have them touch each other, which is when they get to combine and form the number that is their double.

It is that simple and fun to enjoy this game, so do it right now, and don't forget to tell your friends about it too, since they might also like this format and want to have fun with it!

Give Trees A Chance
SHOW ALL