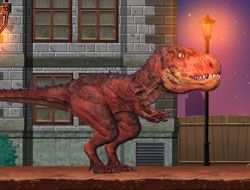 😢 You have problems playing Rio Rex?

We know that our visitors really love playing Dinosaur Games, which is why we are very happy that right now we get to bring you such a game, one which is entitled Rio Rex, and which is part of the series of games with t-rex that we have added quite a lot of here before, where together with a dinosaur you are going to go around cities in the world, and go on a rampage, destroying everything around you. Now, we are going to continue the description by explaining you how this one works, after which you will be able to do a great job at playing it, no doubt about it! You are going to use the WASD keys to move, and the mouse to bite or shoot. Do your best to destroy as many things around you, eat humans and things, and advance to the finish of each level, without being attacked too much by enemies, because as you advance, you will be met with more foes to deal with, which are going to attack back. They get stronger level by level. Also, be on the lookout for any power-ups you can grab, and which can be of much help. Start the fun right now, and play some more awesome games from our website, as they are totally worth your time!

Use the WASD keys, mouse.

Half-Shell Heroes Blast to the…

Save a Baby Dinosaur