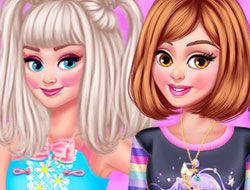 🧐 How is Princesses Costume Party

It is time for yet another new and wonderful dress up game for girls that feature Disney Princesse, one that is inspired by Halloween, since these girls are going out at a costume party, where they are going to be dressing up in different characters, or in clothes that are inspired by things in the world such as candy, which is the route that the first princess you dress up will go with, Elsa from Frozen. The other Disney girls going to the party for you to dress them up to include Rapunzel, who will be a mage, Ariel, who becomes a horse, Moana as a unicorn, as well as Belle, who will be an anime girl, and all of them will have a different theme, although the process is the same, and we now tell you about it. To start things off you're going to do the makeup, where you use the cosmetics available to you in different colors and designs, such as the lipsticks, the eye-liner, and eye-shadows, as well as the blush which goes on the cheeks. When that is done with you go through the wardrobe of each girl and choose the tops, bottoms, dresses, and costumes that are inspired by what they want to dress up with, mixing and matching them however you see fit, since the get-up they will have at the costume party will be totally up to your imagination. There are also going to be jewelry, purses, earrings, and other accessories, and don't forget to pick a nice hairstyle to go with everything. Start the fun right now, and don't stop, since we're sure that more great games are on their way for you right now, one better than the other!