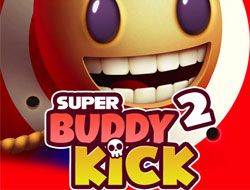 🧐 How is Super Buddy Kick 2

It is not every day that you get to find and play skill games such as Super Buddy Kick 2, a really interesting and new arcade game unlike you've had the chance to play here before, and even if you did, it does not matter, since this one is even better than its predecessor, a torture game with a stickman doll on which you get to experiment however you want to, about which we tell you everything you need to know right now, making sure that playing the game is not going to be difficult in the least, but a brilliant experience! The super buddy doll is going to be held in the air by a rope, and you use the mouse to kick it and hurt it, in its face, body, as well as arms and legs, no matter the place. You have to keep kicking and hitting until you do it enough that the doll separates into pieces and is blasted away. Clicking as much as possible is going to increase your score, and sometimes the doll will leave behind coins, which if you collect you can then use in the shop, where you get to buy weapons such as guns, knives, or bats, which you then use to hit the buddy with. Why? Because hitting the buddy with those will inflict more damage with one click, meaning that you can get a higher score in a faster time, which should be what you are after. Good luck to everyone, and don't forget that the day has plenty more to offer you, as this is just the first new game of the day, so we hope you stick around and play as many of our cool new games as you can!

Jump the Shark
SHOW ALL