The Fright Before Christmas 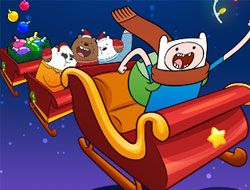 🧐 How is Merry Merging Christmas

Merry Merging Christmas is not just one of the newest Christmas Games online that our administrative team is very happy to have shared with you today, but it is also one of our newest Cartoon Network Games to feature characters from some of your favorite shows such as Adventure Time, Gumball, Ben 10, The Powerpuff Girls, We Bare Bears, and it is a puzzle game with numbers, merging, as well as connections that are going to be unlike anything you've played in this category before, so giving the game a go is definitely something we recommend! Finn is going to fly in the sleigh, as his purpose is to deliver gifts and Christmas cheer, something he is only able to do if you merge the trinkets from the bottom of the screen. When you buy a trinket to add to the board, the cheapest one will be given to you. Combining two trinkets with the number one will give you a number two, combining two with the number 2 is going to give you trinket number 3, and so forth. You need to make these merges to get the new characters as you advance, as for each trinket there is another CN character depicted on it. At certain points, such as when you reach trinket five, a new sleigh with a character is added on the back of Finn's, such as Ben 10. You need to have a total of seven of these because you win the game once you've filled up the bar all the way up to 35. It is sort of like 2048 games, but it has Cartoon Network characters, a Christmas spirit, and theme, and if none of the members in our team got bored playing it, it is guaranteed that everyone else playing it is going to love it a bunch! Start the fun right now, and don't leave, since we've got even more great games in store for you today, and we would hate if you were to miss any!