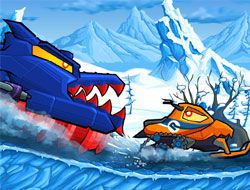 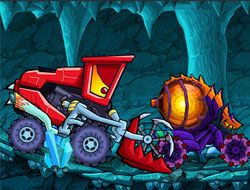 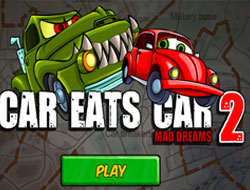 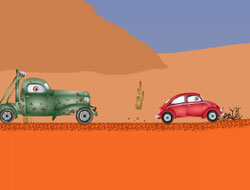 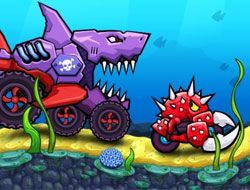 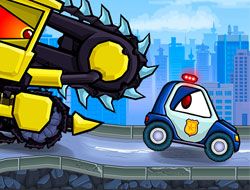 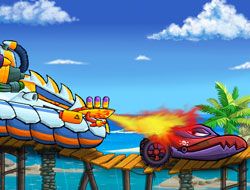 It's time once again to return to the Car Eats Car Games series, where we've been bringing you all of the games in this series for a long time now, with the latest addition to this franchise being the game on this page, a game called Car Eats Car Evil Cars, which we would highly recommend since you get the chance to once more return to the world of cannibalistic cars, making them some of the most action-packed cars games on the internet!

To control the car you use the arrow keys for turning, for gas, and for breaking, while the spacebar is pressed to throw bombs, and the X key to activate turbo. You only have three lives available, so make sure not to lose them all, and try your best to make sure that you get to the end of each level safely.

Destroy all the enemy cars, the federals, who are chasing you, by dropping bombs and making sure they hit them, taking them down. Try to collect as many red jewels as possible, increasing your score, and grab bonus items that give you more turbo, bombs, or special powers, using them against the federal cars when they chase you.

The tracks are filled with crazy stunts you can perform, speed boosts that you should drive into to get faster, but make sure to avoid any traps, holes, spikes, and other obstacles meant to stop you in your tracks. Good luck, and don't stop here, since you get to have even more fun with our content, as only here you can have a gaming experience like no other!

Use the arrows, spacebar, X key.