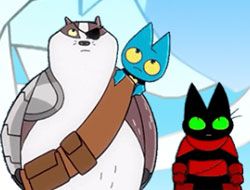 🧐 How is Mao Mao Dragon Duel

When a huge monster made out of ice appears in town, Mao Mao catches a cold, and he hates being sick, which is why he is going to use his powers to be a hero once more and defeat this monster, something that you get to help him out with through one of the best new games of our website, which is called Mao Mao Dragon Duel.

You go through the air with Mao Mao, who advances by himself, with you having to press the Z key to make him jump, or press it twice to double jump. You have to jump from one ice block to another, making sure that you don't fall between them and reach the ground, or you will have to start all over again.

When you see ice balls in front of you, which are attacks of the monster, press the X key to attack it, dashing through them to get extra points. The more that you advance, the bigger your score is going to get, and the more hazards and obstacles you dash through along the way, even bigger will your score get.

As you can see, it is time for you and Mao Mao to be heroes, as only by playing this game can you save the day and help him get rid of his cold, something we hope you will be doing right now!

Which Mao Mao Hero Are You

Teen Titans Go To The Movies 3…