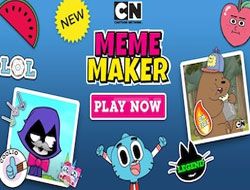 🧐 How is Cartoon Network Meme Maker

Cartoon Network and GamesZap now give you all the possibility of creating your own memes featuring your favorite characters from shows on this channel, such as Gumball, Teen Titans Go, Ben 10, Apple and Onion, Mao Mao Heroes of Pure Heart, ThunderCats Roar, Unikitty, Victor and Valentino, Craig of the Creek, Adventure Time, The Powerpuff Girls, We Bare Bears.

The characters from all these shows, as well as images, are taken from them, can be used for you to make memes, and you start out by picking with which show you want to play. You can click the 'Select All' button and have the options to make memes out of all of them at once, which makes things even more fun.

From the menu to your right you will be able to select the image you want to use, you can add stickers over it, of things like donuts, rainbows, lightning bolts, flowers, or GIFs of your favorite CN characters doing crazy things. You can then pick the text you want to use for the meme, since a joke with a text is what most of them have, and you can save your creation afterward!

We are highly positive that you will create an awesome and funny meme, and you will have had a great ton of fun doing so, which is why we hope that afterward you check out the Cartoon Network Games category and have even more fun with the characters here that you love a lot!

Craig of the Creek Games

Arrow of Janissary
SHOW ALL