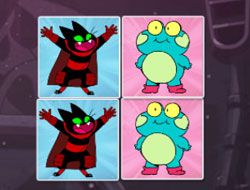 😢 You have problems playing Mao Mao Match Up?

🧐 How is Mao Mao Match Up

It is with great excitement that right now we present to everyone here the new and awesome Mao Mao Games category of Cartoon Network Games that has just been created for our website, where we plan on bringing you lots of new and interesting games based upon this series, as we know for a fact that this new show has become quite popular all over the world, ever since it started airing, which means that lots of children world-wide would also be interested in playing games with these characters they love. Obviously, Mao Mao Match Up is a memory game, but one that has multiple modes of play, about which we will tell you right now and here, so make sure that you pay close attention to what you have to do! The basic model, Free Play, is the simplest one, with one level after another, each one with more cards for you to match. Click on two at a time to flip them, and when they are identical, not only do they disappear, but you also get points in return, while you have to be careful not to lose points by flipping wrong too many times. For the Time Attack mode, each level needs to be cleared before the countdown reaches 0, so you should also be fast and not take your time. The expert mode has the addition of lives, so for every wrong flip you lose a life, and losing all your lives means losing the level and the game, having to start all over again! Let the fun begin right now and here, and don't stop since we would love for you to play more of our great games of the day, as we've made sure to bring you just the best of them, which is why you are our fans!

Which Mao Mao Hero Are You