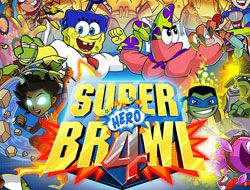 😢 You have problems playing Super Brawl 4?

Super Brawl 4 is one of the newest Nickelodeon Games from our website, with the game also belonging to categories such as Spongebob Games, Teenage Mutant Ninja Turtles Games, Avatar Games, Power Rangers Games, Sanjay and Craig Games, The Fairly Oddparents Games, Henry Danger Games, because characters from these shows, and other ones from Nick, are going to be present in this game, one of the best fighting games in the world, where these characters are going to fight one another, and they are going to be super heroes, which is what inspired this version in the Super Brawl Games series. If you want to learn how they work, read this description to the end, right now. You can choose between the story, or Free Play, as well as the For Fun mode. You are going to be fighting different characters, with the character that you have chosen to be, from the ones available. Use the arrow keys and space bar, and any other controls that you are going to be shown during the game. Fight your way out, trying to win all of the battles, and we are sure that you will have a great time, just like we have had with this game!

Max and Ruby Dress Up

SpongeBob SquarePants and the…