Doctor for Dog with… 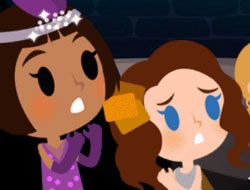 😢 You have problems playing House of Haunts?

🧐 How is House of Haunts

House of Haunts is the name of one of the newest Disney Channel Games and Halloween Games from our website, and this is a combination you do not want to miss out on, trust us when we say that, because this is a game which is set on Halloween, and not only that, but it also features multiple characters from multiple shows on this network, so this game is also going to be found in the following categories: Liv and Maddie Games, Best Friends Whenever Games, Jessie Games, K.C. Undercover Games, Girl Meets World Games, Austin and Ally Games, Invisible Sister Games. If you want to learn what you will do with all these wonderful characters, simply read this description to the end! Use the arrows to walk, interact with different objects to use them with the space bar. Go around the haunted house, trying to escape from it, and make sure to avoid any of the ghosts and creatures in it, because bumping into them costs you the game. There are five levels, each harder than the last one, but also more fun, so give it your best at all of them, and have a great time, only here, where all day long we will offer you great games!

Lego Bionicle The Journey to One…