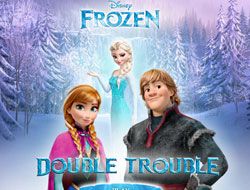 🧐 How is Frozen: Double Trouble

We now want to welcome you all back to the Frozen Games category on our website, for which we always love to bring you new and interesting games to play, since we know that Anna, Elsa, Olaf, Kristoff and all of the others are some of the most beloved Disney characters, and have been ever since 2013, when the Frozen movie was in cinemas, which is when this game has also been released, becoming a classic, and now you get to play it as well. Isn't that awesome? Well, surely you want to, so we are going to now explain the format, so that when you start playing the game you will be able to do a really great job at it! You will play three levels with Kristoff, and three of them with Anna. You will use the arrow keys to run right, left, and jump as well, but also get down from platforms. To interact with items around you, press the space bar. You have to run, jump, and hide from the monsters that are going to follow Anna and Kristoff, because if they catch you, you lose, so get to the end of each level without that happening! Surely you will do great, so start the game now, and try our other Frozen Games as well!

Which Disney Princess Is?