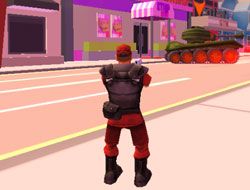 The GTA Games and Y8 Games categories from our website are about to get way better, and that includes the shooting games and action games categories as well, as right now in them we are offering you all the chance to play a game such as Crime City 3D 2, which is a sequel to a game we have added not too long ago, and has been very well received, so we assume that the same thing is going to be true for its sequel, which brings back all of the things you loved about the original, in addition to many other great new games. Let's teach you more about it right now, so that you have no problems playing it. Well, you are going to go on missions such as killing 100 bad guys in the first level, which you do by going around town, and taking down all enemies in your path. You move with WASD, aim and shoot using the mouse, change guns with the middle mouse button, E to enter vehicles, space to jump, X to throw grenades. With these things that you know, and the things you are going to have available in your game, give it your best to defeat all of your enemies, and win the game in no time at all!

Read other 2 opinions below:

Clash of the Legends
SHOW ALL