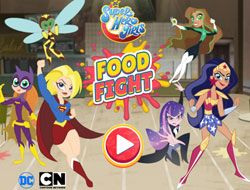 There's no doubt in our minds you won't regret playing a game such as DC Super Hero Girls Food Fight for anything in the world, even more so because the DC Super Hero Girls Games category is one of our best ones from Cartoon Network, and this show is more popular than ever, and it is always a good time with these characters!

Even girls can get a little messy sometimes, which will definitely be the case right now with this game, where characters such as Supergirl, Batgirl, Wonder Woman, Zatana, Green Lantern, and Bumblebee will fight each other with the food in the cafeteria, and you get to take part in the battle as well, by picking one of these characters to become.

The cafeteria is divided into two sides, one for your character, and one for the one you are battling, and you are going to use the arrow keys to move and the spacebar to throw the food. Shoot the food so that you deplete the opponent's health bar before they do it to you first, and that is how you win the food fight.

When upgrades are dropped in the middle, hurry up to them, grab them, and use them to your advantage, getting the upper hand. Good luck, and don't stop here, since today has been filled with one amazing game after another, and you wouldn't want to miss them, trust us with that!

Which Super Hero Girl Are You