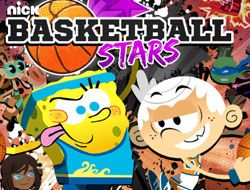 🧐 How is Nick Basketball Stars

Basketball games and Nickelodeon is a great combination of games, trust us when we say this, and we are sure that fans of Sports Games, Spongebob Games, The Loud House Games, Teenage Mutant Ninja Turtles Games, Sanjay and Craig Games, Harvey Beaks Games, Avatar Games, are going to be extremely happy, because characters from these categories are going to be present in this game as well, where you are able to play basketball with them, which is an experience not anyone can say that they have had in their lives. Let us now explain how the game works, so that you can start it and start having fun as soon as possible! You get to choose between the following three modes: tournament, random match, and Hall of Fame. You are going to have to choose which character you want to be to begin. Use the left and right arrow keys to move, the up one to jump, and the space bar to dunk. Get the ball, go to the hoop, and do your best to get it in it, to get more points than the team by the end of the match, and become the winner. Concentrate and do your best, because that is the only way that you are going to get the most out of this game!

Use the arrow keys, space bar.

Clash of the Legends